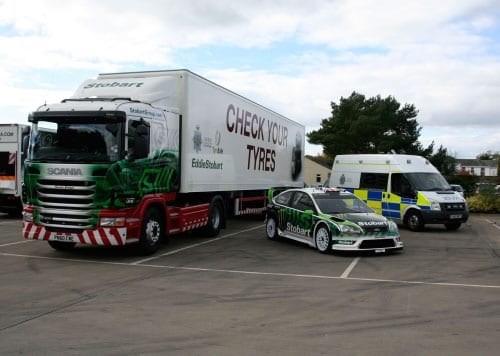 Spearheading the road safety campaign at Cumbria Constabulary is forensic vehicle examiner Shaun McKeown. He has the unenviable task of working out the causes of road accidents and he’s seen some truly horrific sights at crash scenes. Worryingly, tyre defects have all too often played a part.

Why did Cumbria Constabulary get involved?

Although the force already had in place a pro-active road safety programme, extra action was needed following a spate of fatal collisions with tyres blamed as a contributory factor.

What did Cumbria Constabulary do?

The force organised a road-show in Carlisle town centre, which was supported by the local media and home-town business Eddie Stobart including unique livery on one of its trailers. To help promote the tyre safety message Cumbria Constabulary was supported with a range of materials, including dual branded TyreSafe posters and leaflets.

But that wasn’t all. Cumbria Constabulary also actively engaged with local tyre firms, haulage companies and trading standards, while internal support came from colleagues through a departmental campaign.

With its central location in Carlisle town centre, the road-show received a huge turn out and also very positive feedback from the community as a whole. Not surprisingly, Cumbria Constabulary will be actively involved again in this year’s tyre safety month.

However, the last word goes to Shaun, who succinctly says: ‘Tyre safety month can make a real difference to road safety in your region and on a personal level it just feels like I’m doing something to help keep the roads safer.”