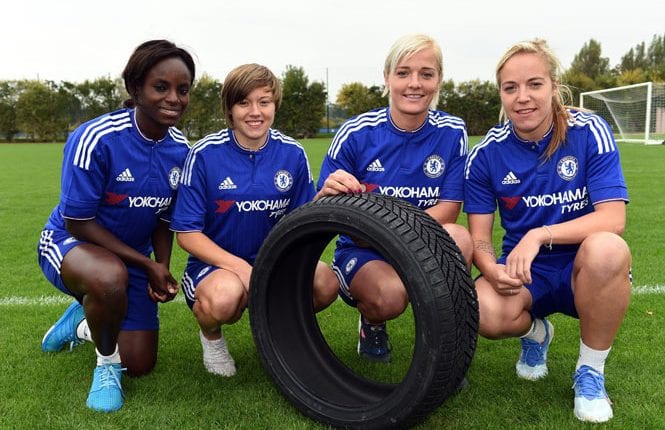 For the months of October and November 2015 Yokohama worked in conjunction with Chelsea Football Club to promote the TyreSafe awareness message at a UEFA Champions League game and 3 Premier League home games.

Why did Yokohama get involved?

The objective throughout the campaign was to inform and educate new and existing football fans who attended the games at Stamford Bridge about tyre safety through use of the TyreSafe logo and message.

We worked closely with the marketing team at Chelsea FC to endorse and reinforce this important tyre safety message. What did Yokohama do?

The big screen display at Stamford Bridge promoted a specially animated TyreSafe message, before each match, during half time and at the end of each game.

Within the match day programme, the Yokohama advertisement featured the TyreSafe logo and ‘Safe Tyres Save Lives’ message, throughout the campaign.

We arranged a photo opportunity, featuring players of the Chelsea Ladies FC team checking a tyres tread depth with a 20p piece, supported by a press release. The manager Emma Hayes said – “Tyre Safety Month’s message of practising #SafeTyreChecks is something we can all do to keep ourselves safe out on the road, so Chelsea Ladies FC is only too pleased to add our support to this potentially life-saving campaign.”

Total attendance figures for both home and away fans present at Stamford Bridge during the period of the campaign:

Total of 165,996 football fans exposed to the TyreSafe message.