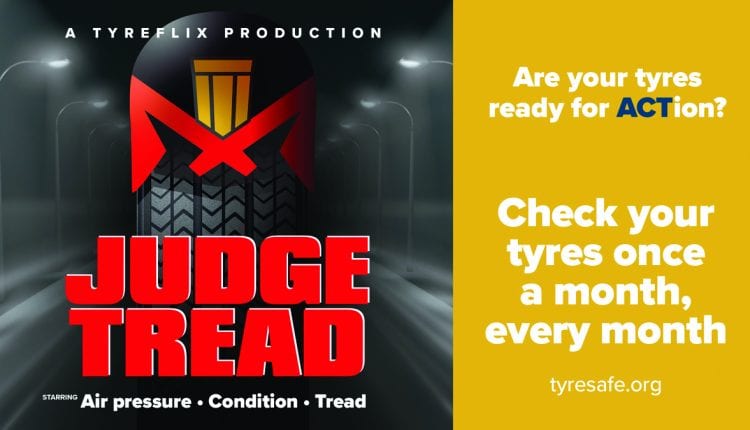 TyreSafe is the UK’s only charity dedicated to raising awareness of the importance of tyre safety and regular tyre maintenance checks. Its annual campaign is focussing on encouraging drivers to ensure their tyres are Ready for ACTion by checking Air pressure, Condition and Tread.

In a UK-wide survey of tyre’s tread depth when they were being replaced1, 27% were already illegal. That’s potentially 10 million vehicle owners vulnerable to a £2500 fine and three-penalty points on their licence.

Another major concern raised by the survey was more than 70% were below 2mm when replaced. While 1.6mm is the minimum legal requirement, 2mm should be a call to action for owners as there is just 0.4mm left (which is half the thickness of a bank card) before they become illegal. With one-in-five drivers admitting they have never checked their tyre’s tread depth2, millions of the UK’s drivers are potentially avoiding major penalties more by luck than judgement.

Checking a tyre’s tread depth need not be complicated. If a vehicle owner does not have a tread depth gauge, a 20-pence piece can be used as a guide. The border of a 20p is 2.6mm, so when inserted into a tyre’s grooves, owners can easily assess if their tyre is close to the limit by checking if that border remains visible. If they can see it at various points across the tyre’s circumference, then they should have the tread depth checked by a professional.

Stuart Jackson, Chair of TyreSafe said: “Checking your tread takes moments but can save lives. The tread clears water from in-between the tyre and the road surface in the wet, ensuring the vehicle remains in contact with the road. If the tread can’t clear the water, no matter what the driver tries to do to adjust the direction or braking, the vehicle will not be responsive, essentially making it out of control.

“Take the 20 pence test at least once a month and before long journeys to avoid the potential to be judged and ensure your tyres are ready for ACTion.”

Checking tyres during Lockdown will pay in the long run