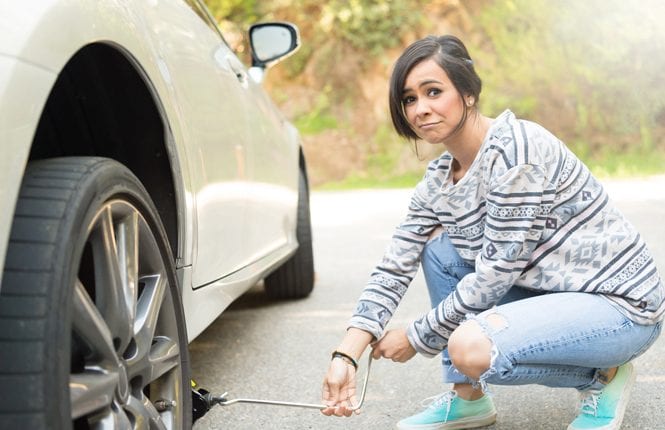 By sharing their stories, those who have suffered a tyre-related incident will encourage other road users to carry out this essential routine vehicle maintenance.

The rear tyre on my motorcycle was repaired against the advice of the manufacturer (Dunlop) Michelin, is the only manufacturer that recommends that its Z rated tyres can be repaired in accordance with the previous BSAU159e. I had no idea of this repair and had only purchased the bike a week ago from a main dealer. The incident could have ended very badly, and I was fortunate to be able to control the bike to the hard shoulder. As an owner of a powerful sports bike I always look after my ride, however on this occasion I was torpedoed by an unseen threat.

When taking my son to university for the first time we loaded the car full of his worldly possessions and enough equipment to set him up in his student accommodation. En-route to Birmingham I had a tyre blowout, luckily for me I was in the process of leaving one motorway to join another so I was already on the inside lane and travelling a little slower than I had been previously so I was able to maintain control of the car and pull onto the hard shoulder but I’m sure it would have been a different story had I been in one of the other lanes travelling at a higher speed. Luckily I’m in the AA so they attended very quickly to help get me on my way again but not before we had to decant the entire contents of the car onto the hard shoulder so they could get to the spare tyre.  It was a very scary experience and not one I want to repeat as we felt vulnerable being so close to fast moving traffic even when we were stood behind the barrier. What is clear though is that this could have been avoided had I checked my tyres to make sure they were fit for purpose and also altered my tyre pressure in line with the heavy load I was carrying.  I always carry out pre- journey checks on my oil and water especially when travelling a long distance but I’d never thought to include checking my tyres and in this case as I was pre-occupied with my son leaving home for the first time and was focussed on making sure we didn’t forget anything it never occurred to me to check them this time either; anyway lesson learnt and it is now very much part of my routine checks.

I recently took delivery of a hire car as I was taking a journey for work. This was to be a round trip of about 300 hundred miles so our policy is to use a hire car for these journeys and not use our own private vehicles. I took delivery of the keys on the morning of my journey and as required I did the hand over checks, fuel damage, boot etc. I also inspected the tyres, not just the usual glance  and random kick of the tyre but a more thoughtful check remembering the well-known acronym ACT, Air, Condition, Tread. All seemed fine until I got to the front off-side tyre. Tread and Condition were fine but to me it looked a little under inflated even to a visual inspection so I raised this with the delivery driver whose immediate response was a perfunctory kick at the offending tyre and then turning to me stated it would be fine as I only had a single day hire and he would get it looked at when I returned the car that evening. Surprised and unconvinced I stated I was going a long way most of it by motorway and at higher speeds so would like it checking properly. He stated he didn’t have a tyre pressure gauge with him so he would have to take it away again,  I kindly offered him mine upon which it clearly showed the tyre was significantly under inflated and so I asked him to get it looked at properly. This was obviously very frustrating for him but as the customer is always right as they say off he went with  a promise to return shortly. I waited some thirty minutes getting more worried that I would be late for my noon appointment but then got a call from the garage to say they would be with me shortly with a new car. Upon arrival I asked why they had changed the car and it turned out that the driver had not returned to his depot but had called into a local tyre dealership that was closer and asked them to double check the tyre and put some air in it.  Upon inspection the garage condemned the tyre as there was some hidden damage that could not be seen from a glance and could not be repaired and had to order a new one before the car could leave. I thanked them for my new car and prepared for my journey thinking I was glad I had insisted on getting the tyre checked.  I was going a long distance mostly on a motorway, what could have happened if that tyre had failed at speed! So as you see it did ‘happen to me’ so always ACT on tyres especially before long journeys.

Learn about the checks which will help you reduce the risks of a tyre-related incident out on the roads.

TyreSafe has a range of assets for supporters and stakeholders to leverage in their tyre safety awareness activities.…
We use cookies on our website to give you the most relevant experience by remembering your preferences and repeat visits. By clicking “Accept”, you consent to the use of ALL the cookies.
Cookie settingsACCEPT
Manage consent