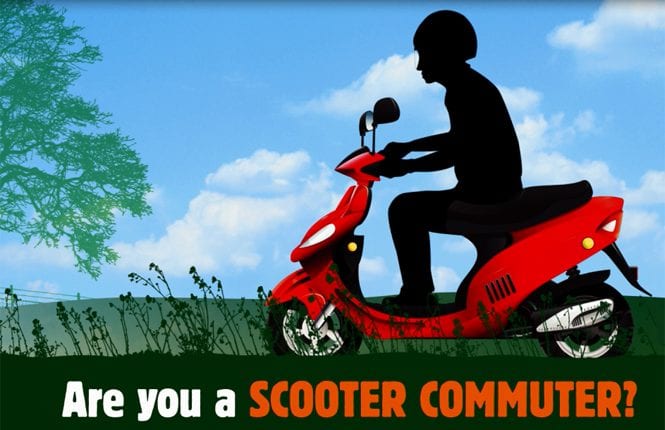 With more commuter-sized motorcycles and scooters being sold than ever before, TyreSafe has unveiled dedicated materials to help keep riders safe on their daily travels. Launched to coincide with the Motorcycle Industry Association’s (MCIA) Ride to Work Week, the potentially life-saving advice for scooter commuters includes choosing the right tyre, essential routine maintenance and understanding when a replacement should be fitted.

The campaign’s launch follows a significant increase in the sale of 101cc to 125cc motorcycles and scooters, which are the class most commonly used for commuting to and from the workplace, college or train station. MCIA figures show this type of motorcycle achieved more sales during 2015 than for any other year since comparative records began in 1983. Those 43,759 new registrations over the course of last year have already been joined by a further 18,096* so far in 2016, making another annual sales record for this class of motorcycle likely.

However, commuter scooters are in the class of vehicle which most frequently fails its first MoT due to tyre defects. According to figures from the Driver and Vehicle Standards Agency**, on average 5.2% of all motorcycles in Class 1 fail their first MoT for defective tyres, while for cars it’s 4.9%. That strongly implies owners are using the practical and economical two-wheeler as a workhorse and not paying enough attention to essential maintenance which could potentially be a life saver.

Steve Kenward, CEO of the MCIA, said: “Ride to Work Week this year follows on from record sales of motorcycles in 2015, reflecting the increasing numbers of motorists who recognise the benefits of two-wheel transport as commuter transport. The MCIA is committed to ensuring those riders, whether seasoned veterans or new recruits, have the right environment for motorcycling to flourish. Safety is, of course, a top priority and the advice on tyre safety from TyreSafe is a welcome resource which all riders can refer to for objective guidance.”

Stuart Jackson, chairman, TyreSafe, said: “While many commuters travel short distances, they need to be aware just how essential roadworthy tyres are to their safety on every journey. With just two tyres in contact with the road, the handling and braking of a motorbike are critically dependent on adequate tread depth and correct inflation. Even though scooters and commuter bikes are a cost effective way to get to work, riders should never scrimp on their safety but should regularly check their tyres to ensure they are in roadworthy condition.”

In Britain, the minimum limit for a tyre’s tread depth on motorcycle’s with an engine capacity of 51cc and over is 1mm throughout a continuous band around at least three quarters of the breadth of the tread. For those below 50cc the tread pattern must be clearly visible around the entire circumference and across the whole breadth of the tyre. A rider will need to use an accurate tread depth gauge to check their tyres are legal.

While measuring the tyres’ tread, riders should also check their tyre pressures are correct. Incorrectly inflated tyres will seriously impact on a motorcycle’s handling and controllability and it is essential riders use the manufacturer’s recommended settings which can be found in the owner’s manual or on the swing arm connecting the rear wheel to the bike’s frame.

It’s equally imperative that tyres are free of damage and riders should look for sidewall scuffs from contact with curbs in particular.

Should the tyre need to be changed, a like-for-like replacement should always be fitted but scooterists are reminded that there are three different measures used for their tyre sizes, making selection potentially more difficult. If in any doubt, always seek the advice of a professional tyre fitter.

New motorcycle tyres also have a thin, slippery residue on them when new as a result of the manufacturing process, so riders should allow 100 miles of cautious riding to ‘scrub’ them in before they will reach optimal performance.

TyreSafe has compiled this and further information in a new animation and series of pages which can be found at www.tyresafe.org

*latest reported figures from MCIA to end of May 2016