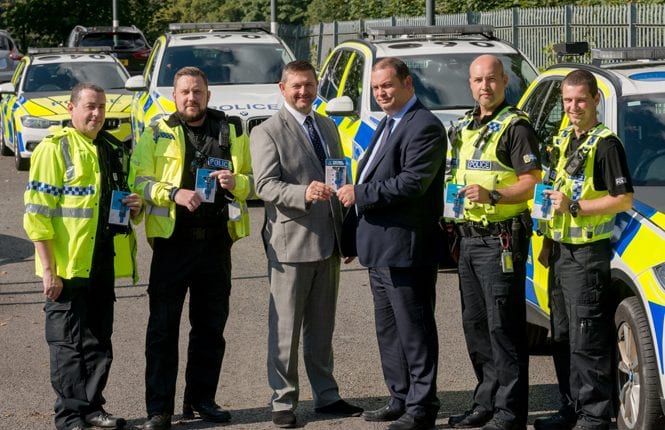 TyreSafe, the UK’s tyre safety charity, has announced substantial support for the national roads policing initiative to increase awareness of tyre safety to motorists on Britain’s roads. This will begin with the charity’s handover of 2,000 digital tread depth gauges for use by traffic officers across the country when they conduct stop checks at the roadside.

It’s the first time tyres will be included on the list of recommended visual vehicle checks carried out by police officers, and is considered as a significant step forward in carrying the tyre safety message directly to motorists. With accurate digital gauges to precisely measure the tread depth, drivers can immediately be made aware of the amount of tread remaining on their vehicles’ tyres. All those drivers will be reminded of the 1.6mm minimum legal limit for tread depth.

However, police officers will also paying attention to tyres’ general condition. A defect officers commonly report seeing is a bulge in a tyre’s sidewall, which is caused by internal damage from being driven over a pothole or from ‘kerbing’ when parking. Damage such as this can lead to a catastrophic failure of the tyre while driving with a high risk of causing a serious incident.

The importance of ensuring tyres are inflated to the correct pressure will also be highlighted. Tyres driven at levels below the recommended vehicle manufacturer’s settings are more vulnerable to damage and wear more quickly. They will also make the vehicle more difficult to control and increase the amount of fuel used.

The maintenance checks drivers need to carry out to reduce the risks of a tyre-related incident are detailed on the packaging of the tread depth gauge police officers will receive. It also features a reminder that for each defective tyre found being used on the roads, there is a potential £2500 maximum fine and three-penalty points.

National Police Chiefs’ Council lead for road policing, Chief Constable Anthony Bangham said: “Nationally, police forces are working hard to reduce the number of casualties on our roads and changing drivers’ attitude to road safety is an essential part of that, requiring on-going and consistent delivery of that message.

“This initiative with TyreSafe has the potential to directly inform thousands of motorists every week on the essential checks they should be carrying out on a routine basis. While the initiative’s main objective is to pass on that potentially life-saving education, drivers should be aware it is our duty to enforce the law and, where warranted, we will not hesitate to do so to maximise the safety of all road users.”

Stuart Jackson, Chairman of TyreSafe, said: “The initiative with the national roads police announced today is a significant step forward for tyre safety, and provides a unique platform to educate the country’s motorists. While TyreSafe is campaigning to inform drivers of the necessary steps to ensure their tyres are roadworthy before they leave home, the evidence clearly shows an alarming number do not. For those, education is vital as TyreSafe does not believe the majority would wilfully place themselves, their passengers or other road users at risk by ignoring this advice.

“However, for those who are consciously choosing to take a risk on defective tyres, this initiative by the roads police should serve as the strongest possible reminder that their attitude needs to change.”

The distribution of tread depth gauges to officers is part of a wider tyre safety strategy for roads policing, to which TyreSafe has contributed.

Driving from home this Christmas? Check your tyres before you leave