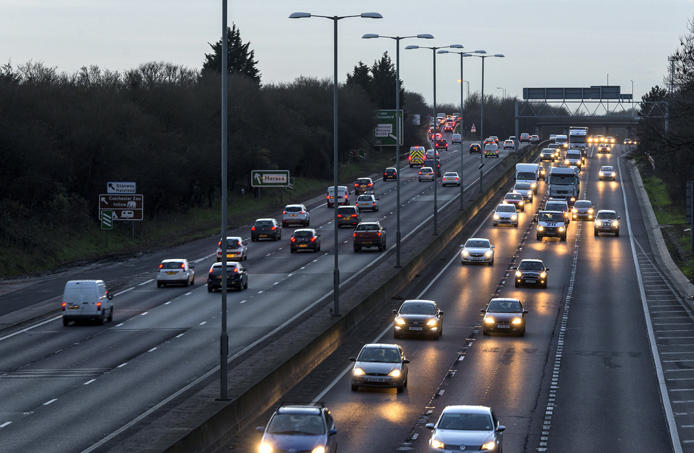 Over 10 million UK motorists could drive a vehicle with an illegal and dangerous tyre during 2016 according to results of the most comprehensive survey of its kind. Announced at the Tyre Safety Month Briefing today, the survey, conducted by TyreSafe in partnership with Highways England, revealed more than 27% of tyres were already illegal when they were replaced.

Over 10 million UK motorists could drive a vehicle with an illegal and dangerous tyre during 2016 according to results of the most comprehensive survey of its kind. Announced at the Tyre Safety Month Briefing today, the survey, conducted by TyreSafe in partnership with Highways England, revealed more than 27% of tyres were already illegal when they were replaced. That equates to more than one-in-four of the 37 million cars and light commercial vehicles (LCVs) on the UK’s roads being driven with a tyre that could cost its driver a £2,500 fine and three penalty points, an MoT failure – or worse. The survey’s findings confirm fears among road safety stakeholders of a poor attitude towards tyre safety among UK motorists, which is increasing the risk of drivers being involved in an incident. A vehicle’s tyres are the only safety critical component in contact with the road and if unroadworthy the effectiveness of the vehicle’s braking and steering systems are significantly compromised. In particular, tread depth has a decisive impact on the amount of distance a vehicle takes to stop in the wet, and must be of at least the minimum legal limit (1.6mm). Previous studies* have proven that the braking distance of a vehicle with tread of 1.6mm is nearly 12m further than a vehicle with new tyres when braking in the wet from 50mph. Stuart Jackson, Chairman, TyreSafe, said: “The Tread depth survey results are a concern. Figures from the Department for Transport** show that dangerous tyres are the largest single contributory factor in accidents resulting in casualties of any vehicle defect – including brakes. If the number of casualties from tyre-related incidents is to be reduced on our roads, the UK’s motorists need to change their attitude to this primary safety feature and carry out regular checks to ensure their vehicle’s tyres are roadworthy. “The concern comes not just from the number of illegal tyres at the point of replacement, but also the proportion which were below 2mm – those with just 0.4mm left (half the thickness of a bank card) before reaching the 1.6mm legal minimum. While a tyre is legal at this point, the amount of distance it can cover and remain within the law is difficult to predict and can only be verified by regular checks. TyreSafe’s own research has revealed one-in-five drivers have never checked their tyres and the majority of the remaining vehicle owners do not do so on a regular basis. “The obvious conclusion is that while one-in-four tyres are illegal at the point of replacement, a further 43% are changed before reaching 1.6mm more by good luck than good judgement. TyreSafe urges drivers to check their tyres regularly before their luck runs out.” Stuart Lovatt, Safety Action Plan Coordinator, said: “Safety is our top priority and we are delighted to have worked in partnership with TyreSafe to undertake this innovative and comprehensive survey on the state of UK tyres. We will continue to support TyreSafe in raising awareness of the importance that tyres play in ensuring that journeys are safe and incident free.” The results follow a survey of over 340,000 tyres as they were being replaced at 819 retail outlets across England, Northern Ireland, Scotland and Wales and compiled by TyreSafe. The average proportion of illegal tyres at the point of replacement across the UK was 27.3% but variances between the four home nations were also highlighted with Wales (29.1%) and particularly Northern Ireland (36.5%) recording a higher proportion of illegal tyres. Scotland’s results were on par with the UK average at 27.4% while England recorded the lowest proportion at 26.8%. However, a concerning trend has been identified in the number of tyres which were illegal and below 2mm at the point of replacement. On average this was 70.4% across all the UK with remarkable consistency in each of the home nations. This figure has increased since last year’s tread depth survey by TyreSafe in partnership with Highways England which revealed 66% of tyres fell into this category. If this trend continues, TyreSafe is warning that higher numbers of dangerous and illegal tyres will be driven on the UK’s roads in 2017. Motorists can help reduce the risks to themselves and other road users by carrying out tyre checks every month and before long journeys. The air pressure in each tyre should follow the vehicle manufacturer’s recommended settings and can be found in the owner’s manual, filler cap, door shut or on a plaque in the glove compartment. Tread depth should be over the minimum legal limit of 1.6mm, roughly the same as the rim of a 20p piece which can be used as a guide by inserting into the tyre’s tread. If the rim is visible, the tyre may be illegal and the assistance of a tyre professional should be sought. While checking tread depth, also look out for any lumps, bumps, signs of ageing or scuffing on the tyre which may indicate internal damage. Again, speak to a tyre professional should the driver find anything they are unsure about. The results 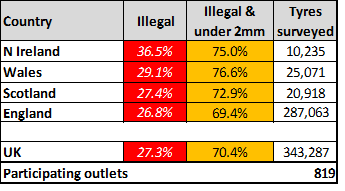 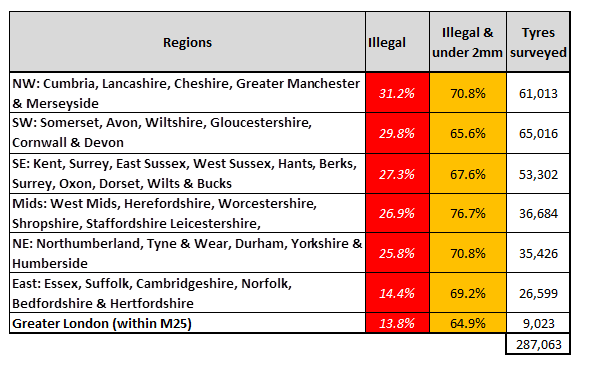 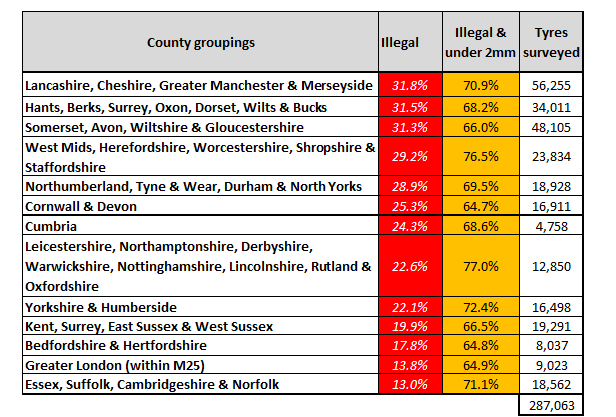 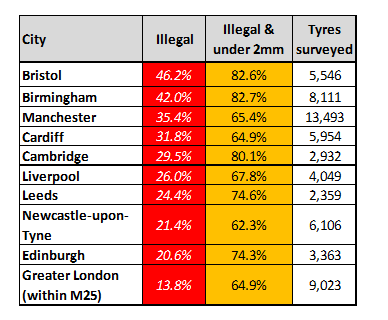 This article was posted on 14th July 2016 in Latest News